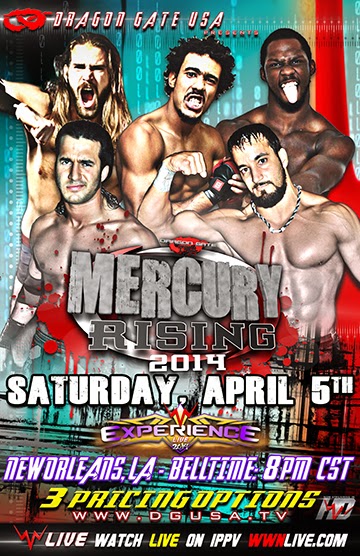 Open the Ultimate Gate saw Gabe Sapolsky bring in Low Ki and Masato Tanaka to combat the absence of Dragon Gate performers. While said absence harmed the show’s legitimacy a little both Ki and Tanaka proved shrewd investments, turning in enjoyable performances in their respective matches.


For Mercury Rising Sapolsky added an additional approach to disguising his lack of access to the parent company’s heavy hitters. Falling back on his love of six man tag team matches he booked a six team four match trios tournament for the card. This not only kept his much loved tradition alive1 it also made the show feel different to other recent DG USA offerings. The stipulation that the winning trio would get to book themselves in the matches of their choice also ensured that the series would add something to the company’s continuing plots and provided a reason for viewers to check out future offerings from the promotion. A shrewd move from Sapolsky.


Once again no time was wasted getting to the action. Chris Hero, Roderick Strong and Masato Tanaka versus Ricochet, Rich Swann and AR Fox opened the show. Noteworthy things about this match included: Strong and Swann being co-holders of the FIP tag team titles; Swann and Ricochet having competed as a team before (The Inner City Machine Guns); Hero having defeated Fox for his EVOLVE gold in February; and that Ricochet was wrestling his first match (though not his first defence, obvs) as the Open the Freedom Gate champion.


At half an hour long it was a satisfying opening contest. 'Ochet and his boys took pastings in the early going to highlight the striking abilities and experience advantage of their three opponents. Swann and Fox each took a turn being isolated by the hard hitters, weathering the storm until Ricochet could be tagged in. He took on both Hero and Strong, wiping them out with a series of one-against-two moves and flying offence. From there the bout evened out and all six men shifted in and out of the ring hitting signature moves and finishers. The finish saw Tanaka, Strong, Ricochet and Fox wiped out, leaving Swann to score the winning pin on Hero following a rollup.


Hero taunted his opponents with his title after the loss. It could have been the beginning or a heel turn but I doubt it.


Chuck Taylor came to the ring before match two. He had been scheduled to team with Drew Gulak and Orange Cassidy but the group had been disbanded the previous night when Gulak attacked Taylor. Whatever Taylor said into the microphone couldn't be understood but it was presumably something about The Gentlemen's Club being no more. Maxwell Chicago joined him and spoke at length before a match between the two started.


The story was that Taylor's heart was not in the match. Basically he wrestled like Orange Cassidy, very slowly and lackadaisically. He was eventually drawn into the spirit of things but the match ended up going to a no contest when The Premier Athlete Brand ran in and beat up Chicago. Su Yung told Taylor that he had no friends so had to fight alone or forfeit the match. He chose to fight. Because he’s a spunky young babyface and that’s what they do.


Baretta stood around at ringside because he didn't want to take advantage of Taylor due to their friendship. It still left 'The Kentucky Gentleman' in a two on one situation against Konley and Nese. He fought them off for a while but eventually the numbers got the better of him. Luckily for Taylor Biff Busick showed up to be his partner. A few minutes later Larry Dallas introduced Teddy Hart to proceedings. He cleared the ring of The Brand and then brought his cat into the ring and teased that he'd be the third man on the team face team.


It wasn’t to be. Hart turned on Taylor and Busick then shouted about bringing wrestling to an end. The audience chanted "This is stupid!" as the Brand slunk back into the ring and scored a winning pinfall.


The third tournament match saw Lince Dorado team with Green Ant and Fire Ant against Moose and the Bravado brothers. It was the most consistently fast of all three first round matches and featured some pretty slick double team moves. Moose was used sparingly, because he's inexperienced, but he handled what he was given well. For the record that was mostly acting as a powerhouse, blocking punches, hitting big moves, and catching his opponents in mid-air. He also proved fond of spears.


After eliminating Moose and Harlem, Green Ant was left free to apply the Chikara Special on Lancelot for the submission win. Green said something crowd pleasing after the win. No idea what though (because of the mic problems DG USA seemed happy to leave unaddressed). Lenny Leonard helpfully filled in the blanks and told us The Colony had issued a challenge for the tag straps at Dragon Gate's May shows, and that the Bravados had accepted.


The show's second half opener with Mercedes Martinez challenging Ivelisse Velez for the SHINE championship. Martinez controlled the pace of much of the match although the champion managed to get in a number of offensive flurries. ‘The Huntress’ retained after a crucifix and then helped the challenger walk to the back. The story was that Martinez had given the match her all and it hadn't been enough, basically. The match was perfectly adequate but not something that anyone will remember.


Low Ki's second appearance of the weekend was up after that. He was facing Johnny Gargano, who received a standing ovation when he entered. Before the match started Gargano cut a promo about being a hero and gave the impression that he still felt he was the Open the Freedom Gate champion (he’d lost it the evening before). The fans chanted "Where's your title?" Low Ki said something that must have been hilarious because the audience cracked up. Then the match started.


A slow pace was established in the early portion of the match, the two men feeling each other out and Gargano spending some time stalling at ringside. When the match got going it was okay but I wouldn't say great. The audience were into it though and reacted to everything loudly. That helped the atmosphere. Each man took a turn holding the initiative, 'The Whole Shebang' going second and keeping it longer. As was the case the night before the finish came from nowhere: Low Ki connected with the Ki Krusher for the pinfall victory.


Which left only the main event: the three-way elimination trios match. For the record this match was Ricochet, AR Fox and Rich Swann v The Premier Athlete Brand v Lince Dorado and The Colony. The Brand jumped the two face teams at the bell to get the ball rolling.


You could probably have guessed beforehand the match would be wild. The favoured triple threat spot of a three-way submission hold was modified, eight guys getting involved applying holds to one another until Nese decided to break it up. Speaking of Nese he performed an impressive Gotch lift power bomb to the outside on Swann. Fire Ant was launched to the outside by his teammates, but the mass of bodies waiting for him caught him and held him in place instead of tumbling to the ground, so Green Ant and Dorado launched themselves off the turnbuckles to send everyone crashing to the floor. Konley became the first man to get an elimination when he performed a fireman driver from the top rope on Dorado.


The pace slowed a little after that as the heels grounded Swann, included a moment where Baretta rubbed the Velcro of his boot across Swann's face. Swann came back with a hurricanrana. AR Fox cannonballed onto the heels as they stood on the outside. Back in the ring Nese got a near fall from a great looking power bomb. 'The Whole Foxin' Show' got a near fall of his own off an Ace crusher. Swann joined in with a handspring Ace crusher seconds later. Ricochet hit his northern lights into a brainbuster on Konley and then hit a Code Red on Baretta. Nese took a Benadryller and a 450 from both Swann and Fox for a near fall broken by Konley. Fox gave Konley a Lo Mein Pain for interfering but took Baretta's running knee as he stood up afterwards. And it was that knee that gave The Premier Athlete Brand the victory in a match that lasted less than twenty minutes.


The audience booed and chanted "Fire Russo!" after the decision. The sentiment was clear: Nese, Baretta and Konley going over was not a popular decision. That was to be expected, what with The Brand being the company's lead heel stable. The result seemed clear enough in advance though. The match stipulation was that the winning team would earn the right to book themselves in any matches they wanted. The Colony and Lince were clearly not going to win because Lince's not a top line performer and isn’t ready to become one, and the Ants will soon be prioritising CHIKARA again. Ricochet's team could have won but it was unlikely what with him being the company’s (double) champion. Match making stipulations are always given to heels, unless there's an underdog babyface involved who's been battling for a title shot for months (see Daniel Bryan). That wasn't the case here so it made sense to give the stip to the heels. They can now use it to drive storylines by giving themselves unfair advantages on upcoming shows.


The event as a whole did not quite meet the standard set by the previous evening. Only the opener and the main event really delivered the thrills and there was nothing capable of competing with Hero v Tanaka or Gargano's loss of the Open the Freedom Gate gold. It wasn't a bad show, it just suffered having to follow a very good one. Taken as a whole the weekend's DG USA and EVOLVE shows were worth watching. The paid off long running stories (in the case of Ricochet's title win a yearlong story) and provided developments that should ensure some good matches and cards later in the year. On the whole I'd say the weekend was more hit than miss for the sister promotions.


1 Sapolsky has a history of booking six man tags at WrestleMania weekend featuring Dragon Gate dating back to his time scripting Ring of Honor.
Posted by Dave at 16:37