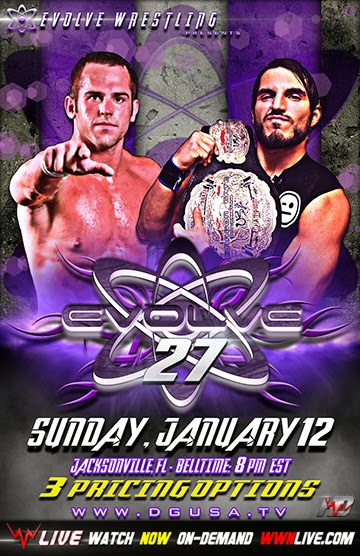 EVOLVE 27 was the closing show of a three day weekend for the EVOLVE promotion (read about the first to here and here). As I noted when writing about EVOLVE 26 Gabe Sapolsky (the man in charge of putting these events together) prefers to build up to his bigger matches in these sorts of situations. In theory that should have meant EVOLVE 27 was the best of the three Florida events. Was it? Let’s find out.


Caleb Konley kicked the evening off with a promo. Instead of being a good employee and participating in his scheduled match (which he said was a six-way freestyle match) he demanded a one-on-one rematch from the previous evening with Lince Dorado.


This is a good point at which to acknowledge Lince's gimmick. He acts like a cat and wears gear with a distinctly feline feel to it. It's not as unique as it may sound: British wrestler Lion Kid does essentially the same thing. Dorado's better at it though, and the US fans give him more to work with. Balls of wool being thrown in place of streamers for example.


As an opener it was great. It was fun, fast, and split the offence between both men. Konley win with a roll up. If was pushed as a big moment for him. I don’t think it was but the thought was there at least.


Match two saw Maxwell Chicago team with Johnny Vandal to take on Dos Ben Dejos, Cruz and Rios. It was a mix of comedy stemming from Chicago's basic wrestling skills and ropey teamwork with Vandal and actual, impressive wrestling from Dos Ben Dejoes. It was enjoyable. The regular combo of Rios and Cruz won after a springboard 450 splash to Vandal.


Gabe Sapolsky favourite Jon Davis versus Rich Swann followed that. They started with a bit of power versus speed shtick. Davis got the better of that. The story of the match was that Davis could easily overpower his smaller foe but that Swann’s resilience kept him in the fight. This included the unsportsmanlike acts of rope-choking and wall-smashign. His more traditional offence included an impressive leaping pump kick to a mid-air Swann, a stiff lariat on the apron, a backpack neck breaker, and an elevated power bomb into a German suplex. Swann made numerous comebacks during the match, all but the last being cut off. That saw him leap off the top rope and immediately hit a Canadian Destroyer.


Swann should be praised for his selling. Too few wrestlers are capable of selling convincingly for an extended. That Swann did so made his various comeback attempts all the more compelling. His vulnerability was the story of the match, his win coming from increasing desperation and luck as opposed to a belief shattering super-comeback.


Match four saw Lance Bravado take on Nick Jackson as part of the brothers versus brothers feud. It didn't really last very long: within minutes Harlem Bravado was at ringside interfering. The referee called for the bell before Matt Jackson showed up at ringside and the two teams had a lengthy brawl all around the arena. This involved plenty of rail dives, not-at-all devastating use of stages and steel walls and, of course, chairs. Around the ten minute mark there was a brief and half-hearted "This is awesome!" chant. It wasn't, but it was an effective way to highlight the intense dislike the two teams have for each other.


The shenanigans ended when the Bucks performed a springboard spike Tombstone piledriver to Lance. That was a step too far: the move would have killed or paralysed Lance had it been real. It was complete excess. Showing no compassion for a man he may have just helped paralyse Matt grabbed a microphone and shouted that the Bucks would be taking back the belts in April. The segment started out as a logical bit of feud progression but ended up as overkill.


After intermission ("Fans we're going to take intermission, feel free to check out the merchandise stand," plugged Lenny Leonard as Lance was being attended to by medical staff at ringside) we were treated to one of the highlights of the weekend: Chris Hero v Chuck Taylor. This match showed why both men are so highly regarded. It was one of the best matches of the night and the three show weekend as a whole. 'The Knockout Artist' won with a cravat camel clutch.


AR Fox joined Hero in the ring afterwards, telling him he wanted to defend the EVOLVE championship against him. He suggest the February 23rd Dragon Gate USA show in Brooklyn. Before Hero could accept Trent Baretta rocked up to continue his campaign against his fellow former NXT regular. He said he'd pinned Fox and so deserved a title shot ahead of Hero.


Anthony Nese and Su Yung strolled out as Hero left (he didn’t provide an answer but Lenny Leonard helpfully confirmed that Hero v Baretta would happen). 'The Premier PA' announced that 'Trentylocks' had officially joined The Premier Athlete Brand. Ricochet was the final man to enter for the scheduled tag bout. After some early dives to the outside the Brand boys got the advantage and isolated Fox in the ring. Nese and Baretta showed promise as a pair rule breakers during this stretch of the bout. They could be a nice addition to the Dragon Gate and EVOLVE tag division.


The pace picked up once Ricochet was tagged in as he and Fox took the initiative. The PAB regained the advantage minutes before things broke down and all four men were wrestling at the same time. The bad guys eventually got the win after Nese blocked a Lo Mein Pain and Baretta wiped out Fox with a running knee before Nese performed a 450 splash for the victory.


Chris Hero returned and congratulated The Premier Athlete Brand, specifically Trent, on the win then challenged him (or them, it wasn't clear) to deal with their issues in New Orleans. Baretta's response was to pose with his new tag partner. He didn't officially accept the challenge either. There will be matches involving Hero and Baretta either on February’s New York shows or April’s New Orleans shows but it’s not clear which.


The main event was originally meant to be Roderick Strong against Johnny Gargano. That had to be changed when Strong was injured at the January 4th ROH TV taping. The solution was to award the winner of the EVOLVE 25 Fray! match the title opportunity. It was a good decision, giving Uhaa Nation something meaningful to do and creating a story to be followed across the three shows.


Uhaa was out first to his wonderfully seventies theme music. Gargano's music couldn't compete with that. Mostly because Uhaa's is awesome, but also because Gargano’s is a little bit nineties. Ain't nobody got time for that. The audience was split during the introductions. Both guys received more boos than cheers, which didn't bode well. Thankfully the crowd backed Nation once the bell rung.


The story of the first few minutes was that Uhaa was more powerful than Gargano. 'The Whole Shebang' spent his time bouncing around, taking time outs at ringside and making fruitless attempts to hurt his foe. He managed to turn the tide at the six minute mark when he apron bombed Uhaa off the stage (but not before the pair had botched a subset flip). Uhaa mounted a comeback of his own with a stream of clothesline and a trio of German suplexes. The top rope splash he followed up with gave him the first two count of the match.


Gargano hit his slingshot DDT. Uhaa came back with a lung blower, a DVD and a moonsault. Gargano got a top rope hurricanrana. Uhaa countered a spear into a series of power bombs. None of it was enough for either man to get a victory. Gargano avoided an Uhaa Combination, lawn darting the challenger into a ring post and slapping on the Gargano Escape. 'The One Man Nation' again nabbed the advantage when he gave Gargano a Death Valley Driver on the apron.


An errant boot from Uhaa sent the ref sprawling, freeing Gargano up to bring the ring bell into the match. Uhaa avoided the weapon and scored a Tomstone piledriver (maybe the most overused move of the weekend) for a two count. Moments later the Gargano Escape was applied again after the champ had slipped out of a military press. Uhaa survived for a few moments but ultimately had to tap out. Gargano remained the Open the Freedom Gate championship.


Post-match Gargano told the fans he loved them... except for a section that had been booing him. He said he'd bash their brains in. He also said by defeating the unstoppable Uhaa Nation he'd become the unstoppable Johnny Gargano. Ricochet interrupted him, natch. He asked the champ to sign a contract that would give him a title match with the winner of Gargano v Strong. Johnny refused and tried to leave but got stopped by Rich Swann (who is a human as opposed to a wealthy swan). He called Johnny a champion without heart (what a diss!) before Jon Davis waddled down to the ring.


Davis revealed that because he was making less money than the likes of 'chet and Swann he'd been taking extra money from Gargano to try and injure people (which he did to feed his family, natch). Gargano said he was lying. Davis said Gargano was on his own. With the odds against him Gargano was forced to sign. Swann laid him out with a super kick after he tried to stab Ricochet with the pen. Ricochet then promised to win the title in New Orleans to send everyone home happy.


One thing that leapt out at me about the three shows was how heavy on promos they were. I appreciate that this was because they existed in part to set up the far more important WrestleMania weekend shows but it did feel like too much at points. And they did at least achieve the goal of setting up matches for later. Hero versus Baretta, the Bucks versus the Bravados, and Ricochet versus Gargano all got attention here, which will make the relevant matches mean more when they roll around.


But that’s a minor complaint. EVOLVE and Dragon Gate USA shows succeed or fail on the strength of the matches they offer, and the matches offered by EVOLVES 25, 26 and 27 was of a very high quality. Fittingly the best was saved until last. Uhaa Nation versus Johnny Gargano was the best match across all three shows. Hero v Taylor and The Premier Athlete Brand v AR Fox and Ricochet were both enjoyable too.


The three shows were a success. Everyone at EVOLVE should be proud.
Posted by Dave at 15:39