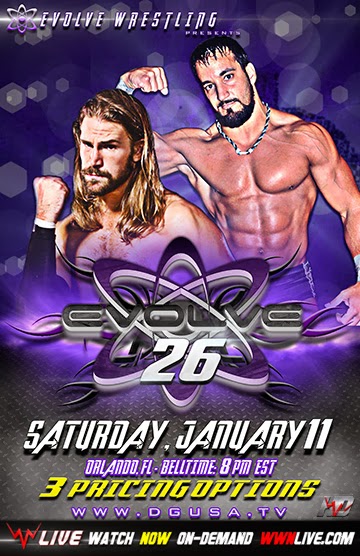 Back in his Ring of Honor days Gabe Sapolsky booked a lot of two or three date weekends. They tended to feature the smaller matches on the earlier shows with the bigger ones saved for the second or third night. It was an approach that worked then and it’s one that still works now. EVOLVE 25 on Friday January 10th was a good show (read about it here), but it clearly adhered to the smaller match approach. The only major meeting to occur was Davey Richards v AR Fox for the EVOLVE championship, and that only happened on that show because Richards was only making one appearance across the weekend.

EVOLVE 26 would be the middle ground card of EVOLVE’s January triple pack, bigger than EVOLVE 25 but still not featuring the weekend’s biggest matches. The show opened with a SHINE showcase match. I will go on record as saying that SHINE has a lovely logo. It’s very nicely designed. The match was Su Yung, accompanied by Antony Nese, facing Mia Yim. She was alone. Imagine the reaction she'd have had if Prince Nama had been with her. But those days are, sadly, gone.


The match was good, a more traditional opener than the twenty-plus minute encounter that had kicked off the previous evening. The match, which included a piledriver (something only rarely seen in wrestling these days and thus noteworthy), and was won by Yim when she rolled Yung up with a crucifix. Yung was able to attack Yim afterwards thanks to a distraction from Mr Nese. Some tasty cheap heat was obtained when he posed over the fallen Yim.


Up next were Caleb Konley and Lince Dorado. It was a fast match that saw both men chuck themselves about to elicit crowd noise. The focus was almost as much on Trina Michaels taking a phone call at ringside as it was the action. That's fine. This was a low card featuring low card guys. It was mostly happening to create a platform for the Konley-Michaels story. Lince won after rolling through a back body drop and getting a roll up. Trina shouted that she was disappointed in him after his loss.


Maxwell Chicago was out next. I was unfamiliar with him. It was obvious within about three seconds that he's a comedy performer. The vogueing and tux gave it away. His opponent was Chuck Taylor. The match started with a strong sense of fun as Chicago announced he knew a whole five moves and then nearly won by KO with a side headlock. It got sillier from there as the two danced, Taylor wore himself running the ropes and Chicago was talked through applying the figure four by Taylor. Good stuff.


Taylor won after performing the Awful Waffle. Rich Swann then sauntered to the ring. He talked about his shared past with Chucky T and Johnny Gargano as Ronin and then asked if Chuck, like him, wanted to prove that they and not Gargano were what made the group work. He suggested they team up in the main event against The Young Bucks. 'The Kentucky Gentleman' agreed.


Match four was an Open the United Gate match, Dos Ben Dejos challenging Lance and Harlem Bravado. This was, we were told, one of the top tag feuds in Full Impact Pro, brought to EVOLVE cards because they were being held in FIP's neck of the woods. It was a good match but there was nothing that made me think I'd like to see lots more from the four. The Bravados retained their titles after a double team elevated neck breaker.


After a twenty minute intermission (described as brief by the ring announcer before it took place) it was time for Ricochet v Trent Baretta. The FIP champ displayed a slight mean streak during the match, playing off his snarky comments to Chris Hero the previous evening and furthering one of the weekend’s leading plots.


It was a slow starter but it was very good once it got going. There were flurries of excitement throughout the middle portion of the match before a typically pacey finishing sequence. Those flurries mostly involved Ricochet doing multiple back flips or Baretta hitting a leaping kick of some sort. There was also a dead lift Regalplex from Ricochet. It was impressive but didn't gel with his 'Future of Flight' nickname. Or physique.


Just because you can do something doesn’t mean you should. By showing that he can deadlift a foe Ricochet wasn’t necessarily showing how powerful he was, it could just as easily be taken as showing that it’s not that tough to heave another human being off their feet. That then makes the feats of strength from guys like Uhaa Nation and Jon Davis seem less impressive.


For the second night in a row Ricochet took a hard tumble to the outside. Shoved off the top rope and landing on his head his lolled around at ringside until the nineteen count, at which point he leapt up and scooted back into the ring. Which brings me to my second complaint about Ricochet. Would it really have been too much to ask for him to pace his recover a little better so that he beat the twenty count in a more convincing fashion?


Back in the ring he was met with a top rope double stomp, something he just kicked out of. Trent slapped him about a bit which led to an exchange of punches. Ricochet got the better of that and attempted a shooting star press. Baretta avoided it and got a two count from a running knee. 'Chet blocked the Dude Buster and performed a float over Northern lights suplex for two. Moments later Ricochet hit a top rope hurricanrana followed by a running shooting star press for another near fall. The 630 splash he hit after that proved too much for Baretta and Ricochet finally got the win.


After the match Ricochet said it won't matter whether it’s Roderick Strong, Uhaa Nation or Johnny Gargano who holds the Open the Freedom Gate championship in New Orleans because he's going to leave the town as champion. For the record I think Johnny Gargano will survive the challenges of Nation and Strong and be the man to defend against Ricochet in NO. Whether he'll make it past ‘The Future of Flight’ or not is another matter entirely. I could see him losing but I could also see him cheating to win, setting up a rematch.


Speaking of Gargano he was involved in the next match. He teamed with Jon Davis to face Uhaa Nation and AR Fox. As you'd expect a lot of the commentary focused on the respective title reigns of Fox and Gargano. This stretched to Uhaa having a shot at the Open the Freedom Gate title the following night. In the ring the match was solid but not spectacular. An early high point was probably a choke slam from Davis to Fox, something which led to the EVOLVE champ being isolated form his corner for a good few minutes. Once he’d made the tag to Uhaa tags were quietly abandoned for the second half and all four men took it in turns to hit stunts and high impact moves. It was a welcome approach.


The faces won after Fox wiped out Gargano with a Lo Mein Pain and a 450 on Davis before Nation gave him an Uhaa Combination. Afterwards Gargano gave Davis a tongue-lashing for not managing to take out Nation. Then he left. Before the bigger man could get to his feet, obvs.


Before Anthony Nese v Chris Hero started Trent Baretta sauntered out to the ring, prompting chants of "You got beat!" He stayed at ringside to watch the show. Perk of the job, innit. The match was about what you'd expect. A blend of standard indy thrills and spills and vaguely sports entertainmentesque sequences. For the record the sports entertainment stuff came from both men. Nese seems cut out for that style anyway and Hero's clearly picked it up in NXT over the last couple of years. It's not bad, it just stands out on a non-WWE show.


In the closing moments Nese survived two rolling elbows and a rolling boot but was forced to tap out to a cravat STF. Yes, Hero has gone back to using the cravat a lot. Deal with it.


Trent Baretta told Hero that he's "not that guy" any more. What he meant was that Hero is no longer a big deal to non-WWE wrestling. He added that while Hero's been learning from Bill DeMott he's been "killing it" (as with the previous show's review I hope he's speaking metaphorically) all over the world. Hero told Baretta not to be crybaby and reminded him that he'd won while Baretta had lost. That's what 'Trentylocks' had gone out of his way to say to Hero at EVOLVE 25. Tit foir tat. I there any greater approach to modern wrestling booking?


The Young Bucks defeated Rich Swann and Chuck Taylor in the main event, putting down Swann with a springboard Tombstone piledriver. It started quick and stayed that way all the way through. That's always going to get me on side. I love a quick match. The pace also lent itself to the Jackson brothers' approach to selling (or lack of it). It was the match of the night.


The show ended on a promo. Johnny Gargano returned to the ring to put down his former Ronin teammates. He referred to them as lackeys and singled Swann out as a "mascot". That provoked a brawl between Swann and Gargano which created a distraction that allowed the Bravados to sneak attack the Bucks. Taylor tried to talk them out of continuing their nefarious actions but he got dropped too. The broadcast ended with Lance and Harlem posing their way backstage and Nick, Matt and Chucky T getting a round of applause for standing up. Yep, genuinely for standing up.


As noted at the start the show was very good and a step up on the enjoyable EVOLVE 25. The function of show 26 was to provide good matches and continue the promotion’s various storylines. It achieved the former with the main event, Ricochet v Baretta, and Gargano and Davis v Fox and Nation. It achieved the latter with the various post-match promos. Nobody could have expected more from this card.
Posted by Dave at 10:50