If you saw last Monday's RAW you saw The Rock's surprise return. Even if you didn’t watch the whole show there's a good chance you've gone out of your way to see that segment. I mean, it's The Rock. Everyone loves The Rock, right?


I'm a fan of The Rock, and if he's available for unannounced appearances I'm all for WWE using him. It helps make RAW feel less formulaic and monotonous than it is. It helps to propagate that old line that used to be very common: anything can happen in WWE! When he makes these appearances sticking him out there to interact with a heel who ca benefit from a rub is the right thing to do. Talking and being charismatic are things Rock’s best at, so putting him in situations where he can do that is good.


What's harder to get into is the nature of Rock's interactions. Rock was always going to look a bigger star than Rusev but Rusev didn’t need to be so marginalised in his treatment. The segment ended with Rock standing victorious in the middle of the ring and Rusev, the man who'll be on RAW next week while Rock's a film set somewhere, standing in the aisle humiliated. It took eleven punches (one admittedly doctored with Rock’s apparently potent saliva) to dispatch ‘The Bulgarian Brute’. 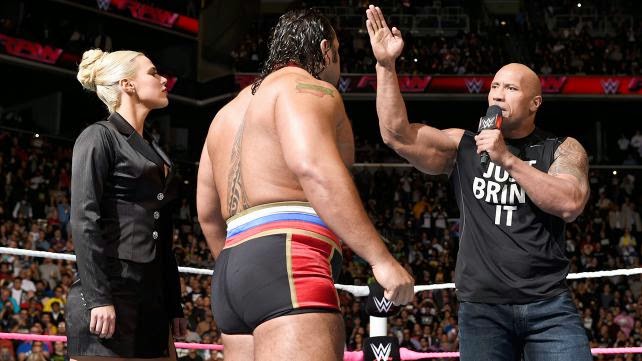 Rock gained nothing from this. All he did was humiliate a pair of mid-card heels. Rusev wasn't elevated, and this would have been a perfect chance to do so. WWE got some press attention from the stunt but it was nothing mind-blowing. The coverage made it clear to anyone not watching WWE every week that The Rock can breeze back in with no notice and effortlessly shut down guys who are below his station. It’s what they expect to hear and so it’s nothing to get excited about.


Imagine how different things would have been had Rusev flattened 'The Great One'. It would have enhanced the Russian's status as the unstoppable monster, especially if Rock had sold the beating when asked about it in interviews (and considering his history with willingly putting guys over we can assume he would have). It would have gotten people talking, even more than they already are, about a Rock versus Rusev match. Even if WWE had no intention of promoting that talk of it wouldn't have done 'The Super Athlete' any harm. They could have paid the beating off in a return skirmish in which Rock got the upper hand. Or hey, maybe they could have altered their plans and asked Rock if he’d be interested in an official ring to the ring to face Rusev. However things played out Rusev would have gotten some attention from non-WWE sources, and that would have helped to establish him as a force.


This short-sighted booking and obsession with protecting guys whose status is completely safe isn't going to get WWE anywhere. Hopefully next time The Rock returns or Rusev is confronted by one of the big boys things will turn out differently.
Posted by Dave at 07:52