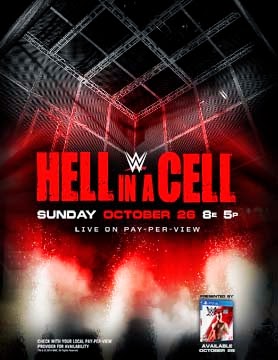 So here we are. The sixth annual Hell in a Cell pay-per-view. The sixth!  They shouldn’t have gotten to the first. A gimmick match being the focus of an annual event devalues it, as I’ve written many times before (usually during Hell in a Cell previews). The entire point of stipulation matches is that they get wheeled out when a rivalry calls for it, not because the name of a show dictates it.


But hang on a moment. This year we actually have a fitting feud for the Hell in a Cell, WWE’s premier gimmick bout and feud-ender. Former Shield brethren Dean Ambrose and Seth Rollins have been waging war on one another since the beginning of June. Clocking over four months and a surprisingly slim number of televised bouts1 they’re the natural pair to close this show inside the cage.


Only they’re probably not going to get to. John Cena and Randy Orton have also been booked to clash in the Hell in a Cell for absolutely no logical storyline reason. They’re meeting again because they need something to do. That’s it.  Ambrose defeated Cena to earn his match against Rollins, a foolish move in itself: Cena being in contention for a Cell match with Rollins detracted from the animosity between Rollins and Ambrose. Losing to Ambrose meant Cena got a Cell match with Orton.


Cena and Orton meeting in a Cell brings with it a barrel load of monotony. The two have collided on WWE television dozens of times over the years and have never produced anything beyond an average match together. They’ve faced off on pay-per-view a few times this year alone, most notably at Royal Rumble where they began their anything goes encounter (brought about by Orty viciously attacking Cena’s father) with a lock up. Had their programme rumbled on since then the Cell would have at least made sense, although we should probably be thankful that it didn’t. Eleven months of Cena v Orton (they’d started off with a staredown at the end of the 2013 Survivor Series) is depressing just to think about.


Also worth noting is that this isn’t even the first time the two have met inside the Hell in a Cell. They went on fifth at the inaugural 2009 HIAC pay-per-view (in what was billed at the time as their final encounter EVER), a show that was opened by CM Punk v Undertaker and closed by D-Generation X v Legacy. Yeah, Punk, ‘Taker, Orton and Cena all worked Cell matches lower down the card than Ted DiBiase Jr yet Rollins and Ambrose likely will not close the 2014 instalment.


Wherever they’re put on the card the former Shield lads will almost certainly produce the better bout. In an ideal world Cena and Orton would open up the card and do everything in their power to make it the best entry in their never-ending rivalry. With the rest of the card in between the two Cell encounters Ambrose and Rollins would be afforded as much cool down as possible and could go out and tear the house down with a Cell clash given a suitably different layout.


But we don’t live in a perfect world. WWE could pull these matches off (just) if they wanted to. But that would involve portraying Ambrose and Rollins as the biggest stars of the night. I just don’t think it will happen. Cena and Orton are the established names and they’re the ones WWE is convinced the majority of people are tuning in to see.


Let’s pick winners. Cena seems likelier than Orton to win. They’re not actually feuding with each other and when that’s said of a Cena PPV match then he’s usually the safer choice. Meanwhile Ambrose probably needs the win in his match more than Rollins. He’s only beaten Seth once on TV (and that’s the only place it counts in WWE) and this is the environment in which ‘The Lunatic Fringe’ has to win if he is to be the anti-hero we can believe in, overcoming everything Sethy B lobs his way. That includes the likely Kane interference.


The rest of the card is very clearly intended to be filler.


Paige and AJ Lee will have their fourth consecutive pay-per-view bout. Only one of the previous three was not a singles match (Night of Champions saw them joined by Nikki Bella for a three-way… get your minds out of the gutter) and they’ve had a few singles matches on TV too. None of them have risen above average. I had high hopes for the programme when AJ returned but it’s become one of the dullest long-running programmes in years.


I’ll pick Paige to win as that would get the title back on her and allow AJ to be put in the chasing babyface role she’s better suited to at this point. Note that I’m expecting their feud to continue. WWE doesn’t have any other women ready to step into a featured feud, even for the meaningless Divas championship. The frustrating thing is that they could have a stellar women’s division if they wanted one.


Sheamus’s United States title defence against The Miz is mostly an excuse to get the popular Damien Mizdow character on to the show. It’s a good call as he’ll get the crowd reacting while the two former WWE world champions put on a good match. I think this could play host to a title change. ‘Great White’ has done nothing with the belt since winning it in May. Putting it on Miz would allow Mizdow to do the replica belt shtick he did with the IC title on the September 22 RAW. Beyond that sight gag it could also lead to a Mizdow face turn and a feud between the star and his stunt double, perhaps restoring some credibility to the championship and making something of Sandow’s popularity.


We all know that Big Show versus Rusev will end in one of two ways. Either Rusev wins clean or Big Show wins via disqualification. I think it will be the former. There’s also a chance that Mark Henry will turn on Show to start a pointless rerun of that feud. They’d be of more interest contributing to the tag division as that’s something new for them but a split seems inevitable.


Goldust and Stardust will defend the tag team titles against the Usos. We’ve seen these teams face off many times. They can be trusted to produce something competent without burning the crowd out.  I’ll predict the champions to retain, because why not? As is the case with the Divas, WWE could have a solid tag division if they wanted one, making these constant repeats obsolete.

Not confirmed at time of writing but expected to happen is Cesaro and Dolph Ziggler. They are two of WWE's best and should put on the best match of the night outside of Rollins v Ambrose. An Intercontinental title reign would be nice for Cesaro at some point as he's the sort of guy who could have a good run with it. But before that happens the belt needs to be given meaning again, and the best way for to achieve that is to keep it on 'The Show Off' for a while and continuing to give him lengthy matches on TV and PPV. Ziggler to retain here, but let Cesaro take it from him in the future.


Finally, there’s the Nikki Bella versus Brie Bella match with one of the most wrestling stipulations WWE has done for quite a while. In a move straight out of the Jerry TV pilot in Seinfeld the loser of the match will have to be the winner’s PA for a month2. It’s the sort of scenario that can only work if a heel is the victor, and it would also provide a natural setup for a rematch. So I think Nikki will win. As for match quality… the match will certainly happen.


Hell in a Cell seems very much like a one match card. I can’t imagine anyone being interested in the Cena v Orton match, even with the desperation (overbooked, call it what you will) stipulation that the winner will get the next shot at Brock Lesnar’s WWE championship3. Ambrose versus Rollins in the top gimmick match the company has is the clear draw. The mid-card has nothing to offer beyond Cesaro v Ziggler and Miz and Sheamus’s match, and the latter’s only of interest because of a man at ringside. Hell in a Cell 2014 will have a tough job of being an interesting show.


1 They were both involved in the Money in the Bank Ladder match on June 29, won by Rollins; Ambrose lost to Rollins and Kane in a handicap match on the July 29 SmackDown; Rollins won their enjoyable lumberjack encounter at SummerSlam; and Ambrose picked up his sole televised win over Rollins on the August 18 post-SummerSlam RAW.


2 “Is this common in your legal system?”


3 Presumably this will take place at Royal Rumble. That will give WWE three months to promote their number two card of the year. Good move. Thumbs up!
Posted by Dave at 18:07