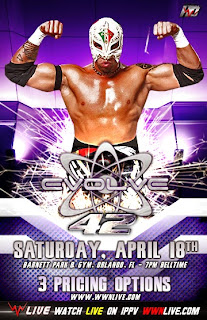 Twenty-four hours after hitting Shine stronghold Ybor City with EVOLVE 41, the EVOLVE crew hit up Orlando for EVOLVE 42. Coming off an enjoyable show in Ybor and a packed WrestleMania weekend offering this show had tough acts to follow. It got off to an underwhelming start and was set back by technical problems (something so common with iPPVs that I've stopped mentioning them, for the most part) but pulled things together in its final hour to be a satisfying event.


The show kicked off with Lenny Leonard and Ron Nemi joking about sandwiches on commentary and Santana defending the Shine championship against Andrea in the ring. This was more a platform for advancing the Su Yung and So Cal Val issues than anything else. This priority extended to the finish, where Yung grabbed Santana as she hit the ropes and held her for Andrea to cheap shot her. That backfired and Su was sent sailing off the apron, which caused a brief pause from Andrea that allowed Santana to apply a small package for the win.


The match as a whole was enjoyable but pretty basic. Andrea seemed really uncertain at points and definitely didn't seem to have the nasty streak which would make her role as the new monster on the Shine scene believable.


After that match Val called Yung worthless and an idiot (but not a worthless idiot). Andrea gave Yung a Samoan driver. Then Val dumped water on her and got carried backstage by Andrea. Yung was also carried backstage, but by a lowly referee. This would all be revisited in the main event. While I think it's commendable that EVOLVE are telling a story focusing on women I find the specifics odd. Su Yung did a fake heel turn only last year, when she pretended to side with Rich Swann against the PAB. Val doesn't wrestle. And the majority of the feud will play out in Shine, a different company. I understand that the idea is to get more people buying Shine events to see how things play out but I' not convinced what we've seen so far will do that.


Match two, emphasised as being the official opener by Leonard, once again saw Martin Stone on job duty. This time it was Ethan Page getting the win over him with an Ace crusher and a Spinning Dwayne. It was another match as much about furthering an angle as providing good wrestling. In this case it was Leonard discussing Page's fresh rivalry with Johnny Gargano.


Match three saw stringy-haired ROH job lad Andrew Everett become a stringy-haired EVOLVE job lad to lose to Rey Horus. It was a fun match but one I expected to be quicker and have more highlights. Aside from Everett hitting a lovely Asai moonsault and turning a headscissors into a kip up and Horus's match-winning top rope hurricanrana there wasn't much to be dazzled by. But the crowd wasn't overly large so I understand them not taking too many risks, and they avoided being outright boring, so on the whole it wasn't bad.


TJ Perkins versus Timothy Thatcher was the first unquestioned hit of the evening. Their early mat wrestling was slick, engaging and logical, Thatcher working with even more ferocity than usual to convey his increased desire to win after his loss to Roderick Strong in the previous evening's main event. They traded the initiative back and forth, each focusing on the other's arm. That's standard for Thatcher, less so for TJP. It made sense given the grappling credentials (underrated in Perkins' case) of both men.


Particular highlights of the match were TJP turning a Thatcher headstand into a body scissors; Thatcher employing a rolling gut wrench; Thatcher countering a frog splash into a Fujiwara armbar; TJP hitting a GTS into a Pele kick; and the match-ending exchange of armbars which ended with Thatcher gaining the upper hand (no pun intended) to force a tap out from Perkins. After the match Thatcher, who we're told doesn't talk much but has had something to say on several recent shows, took a microphone and requested a match with the winner of the Galloway v Strong title match that will occur at the next batch of shows.


Biff Busick then took on EVOLVE's top heel, Roderick Strong. I make note of Roddy being the company's lead bad guy because he only got brought in as a regular in the back half of 2014. It's impressive how entrenched he is in the company after such a short time. Yes, he was a known quantity before he debuted but it's still impressive that it feels like he's been in the company for years and has become one of its focal points.


As is the case with the majority of Strong matches in EVOLVE this match began with him doing some heelish stalling. Unlike usual Biff managed to get his hands on Roddy and they immediately launched into an intense match, brawling at ringside and swapping big moves both in and out of the ring (including a nasty-looking backbreaker on the barricade from Strong). It was a welcome change of pace after the deliberate Thatcher v Perkins bout.


For the second night in a row the match ended on a judgement call from referee Brandon Tolle. This time he halted the match as Strong was trapped in the rear naked choke. Strong got in Tolle's face about the decision before storming backstage. Busick stayed in the ring to tell everyone that Tolle had finally made a good call, a reference to him losing because of Tolle the night before. Engaging heel mode he also declared that he was unappreciated by EVOVLE managements and fans. Thatcher returned to the ring and said Busick was pissing him off. They brawled and were separated by referees and FIP wrestlers. Thatcher staggered backstage afterwards, Lenny Leonard theorising that a slap to the ear and thrown off his equilibrium. Shoot or storyline? It's tough to know with EVOLVE.


Trevor Lee v Davey Richards took the semi-main event slot. Lee was impressive in his match against AR Fox at EVOLVE 37 in January and he was impressive again here. He's good at the en vogue style of martial arts kicks and knee strikes blended with more traditional suplexes and power bombs. Richards is a peculiar dude, which makes for an interesting in-ring character when he's on form, and also a very good wrestler. He meshed nicely with Lee and gave him a lot of time to show what he could do. He also had him kick out of a top rope double stomp, which created a great close two count. Lee lost after a roundhouse but his status was enhanced by looking competitive opposite Richards. He's definitely somebody that warrants further EVOLVE bookings.


The headline match was a street fight for the Open the United Gate championships, the Ronin team of Rich Swann and Johnny Gargano challenging Anthony Nese and Caleb Konley. For the record this was the first time the titles had been defended in 2015. The last defence had been made by Konley and Trent Baretta against The Colony and the Bravado brothers during the WWN tour of China in November (interesting side note on that is that five of those six names are no longer associated with the company). This highlights just how little attention the EVOLVE tag division gets. They're at the point now where they should make a concerted effort to make their tag belts relevant again.


That said this match did give the titles a boost. Not just because Swann and Gargano are big deals in EVOLVE but because all four men wrestled like the championships meant something to them. Well, I say wrestled, but this match didn't actually feature much wrestling. They made good use of the street fight stip, using ladders, chairs and tables to put on a crazy brawl that should have satisfied anyone into this style of match. Highlights included a lawn dart into a rubbish bin (trash can, for North American readers), Konley bumping through a ladder propped between the ring and the barricade (sadly missed by the cameras), Su Yung misting So Cal Val before cross bodying Andrea, an amusing but slightly too long New Jack-esque weapons sequence, and a power bomb onto a ladder from Gargano to Nese followed by Swann's match-winning frog splash. It doesn't sit especially well with the general style in EVOLVE but it was good fun for what it was and worked well as a rarity.


After the match Ethan Page heckled Ronin from the commentary table (he'd called the match). Gargano said he didn't want to wrestle Page and called him a nobody. More shoot comments about Gargano being a big shot followed until Page got up and teased getting in the ring for a fight. He didn't though. Instead he wandered backstage, leaving Ronin to celebrate to All Night Long.


EVOLVEs 41 and 42 were a good pair of shows. There were a few skippable matches but nothing bad and different tastes were catered to, something illustrated nicely by the contrast in main events. Sapolsky continued building up "his guys" Caleb Konley, Timothy Thatcher and Ethan Page, showing they were the right selections for their larger roles. And you know what? I didn't miss AR Fox once.