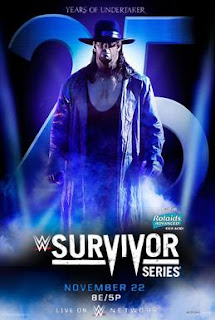 Back in late 1998 I started watching wrestling. The first major pay-per-view that came up was Survivor Series. I didn't watch it at the time, I didn't realise it was available on Sky Sports, for free (remember those days?). Instead I bought it on VHS months later.


I knew what happened at the show though, thanks to recaps and whatnot. A tournament was held to crown a new world champion, the title having been vacated two months earlier after Undertaker and Kane had pinned reigning champ Steve Austin at the same time. It was a long, convoluted series of matches that should have been cut down and had some opening round matches moved to RAW but that was never going to happen under Vince 'More is More' Russo. The show ended with 'People's Champion' The Rock aligning himself with Vince McMahon to form The Corporation.


Seventeen years later history has, somewhat, repeated itself. A real life injury to Seth Rollins has forced a vacation of the WWE championship. A tournament has been held across two weeks of TV shows and will culminate with the semi-finals and final matches at the PPV. The man most people expect to make the finals is Roman Reigns, who was originally going to challenge 'The Future' for the gold before the injury occurred.


Reigns is The Rock's cousin. That, the fact that Survivor Series is playing host to a tournament final, and the fact that the show will forever be synonymous with The Montreal Screwjob, mean we are almost guaranteed a swerve finish to the evening's final match. And that it will feature Roman Reigns.


Of the two semis one seems painfully obvious while the other is a closer call. The obvious one is Roman Reigns versus United States champion Alberto Del Rio. I'll be amazed if we see ADR in the final. It seems safe to say he's made it this far to give Reigns a safe match where the crowd dong revolt against him. That's the same reason his quarter final victory over Cesaro was tucked away on RAW.


The other semi is Dean Ambrose versus Kevin Owens. Ambrose winning and having a showdown with his best bud and former Shield teammate seems like the obvious thing to do, and WWE isn't a company that likes to shy away from the obvious. The only wrinkle is that KO has been doing sterling work lately and his advancement to the final would surprise without seeming innocuous. Were this tournament taking place this time next year or had Owens debuted a year earlier I'd argue in favour of him getting the win over Ambrose and facing Reigns in the final. As it is he's not been around long enough to be a truly convincing finalist against a Chosen One like Reigns.


Which leaves me predicting a Reigns v Ambrose final. With the talent WWE had available for the tournament this is probably the most natural final they could have gone with. Yeah, it would be nice to see Cesaro there but it would have been too much to ask. A slow build is what's required for Cesaro at this point, he's not been built up as credible enough for a pay-per-view main event in which he may win the world title.


The prediction I'm happiest making is that we'll see some sort of shmoz finish, very likely playing on Survivor Series '98 or the Montreal Screwjob. Or both. An Ambrose heel turn, victory and alignment with The Authority isn't impossible but a Reigns victory seems likelier. I'm convinced one will turn on the other (a huge waste of a previously wonderfully solid wrestling friendship) but I don't know which. Which makes me think WWE has slightly mishandled this tournament because I should be getting excited about seeing who makes it to the final to crow a new champion.


I'll settle on Reigns winning and Ambrose going heel because of jealousy. Because Reigns is the clear favourite and Ambrose is so over that it would be stupid to try and turn him. Which means WWE will.


Outside of the tournament Survivor Series is looking unspectacular. The Paige v Charlotte Divas title match has been overshadowed by Paige's (entirely scripted yet still) controversial comments about Reid Flair, Charlotte's dead brother, being a quitter. 'The Nature Girl' will almost certainly overcome these terrible, terrible (entirely scripted) comments and retain her championship. Because she needs another strong defence if she is to be the star the company wants her to be.


Dolph Ziggler and Tyler Breeze will finally have a match after around a month of teasing. I can't imagine either guy having a bad match so it should be good. The trouble is that it's been left to simmer too long and their issue (basically summed up as "Summer Rae") and it feels like they're just killing time here. Which is a shame. 'Prince Pretty' being the new boy who's only beaten R-Truth so far means he should win. Plenty of time for 'The Show Off' to get wins later in the feud.


The final match (other than a traditional Series match with no wrestlers confirmed for it) is The Undertaker and Kane versus two members of the Wyatt Family. Which doesn't seem particularly interesting considering the event marks 'Taker's twenty-fifth anniversary in WWE. I understand this match has probably been rejigged because of injuries and the necessary tournament but it's pretty rough that this was the best WWE could come up with to begin with. Could 'The Dead Man' not have had one last solid non-'Mania singles outing against someone like Cesaro or Ambrose or Owens or Ziggler? A storyline for that would have been easy enough t come up with: a face like Cesaro or whoever wants the honour of facing Undertaker on his anniversary, a heel like Owens wants to embarrass and humiliate him on it by defeating him.


A singles match letting someone underutilised shine would have been better than pairing him with Kane against unadvertised opponents. Speaking of which my view is that if the Wyatts are represented by anyone other than Luke Harper and 'The Eater of Worlds' someone somewhere in the company doesn't have their priorities straight. Wyatt is the star of his act and Harper has tonnes of potential should a decent mid-card ever happen. They are the best two wrestlers of the faction too.


I'm usually all for younger wrestlers beating older wrestlers because WWE needs to get new stars established. I'm not going to argue in favour of that here. After twenty-five years in the company Undertaker winning this match (by which I mean the one WWE have booked him in) is the right call. That said a Wyatts win would be fairly unexpected and could actually give Bray the credibility shot he needs.


All in all Survivor Series will be memorable because of the tournament finals. But there's little else on offer outside of that right now. New stars are needed. And soon.