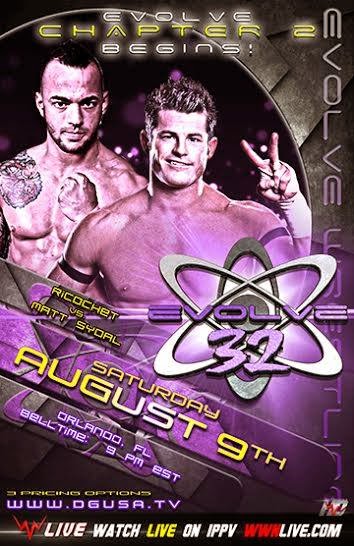 The second show of EVOLVE’s reboot weekend kicked off with new champ Drew Galloway being introduced by Joanna Rose for an in-ring interview. Galloway explained that he’d chosen to wrestle his first non-WWE match in several years on an EVOLVE card was because he wanted to be surrounded by great talent, going on to say that EVOLVE 31 would not just be about the promotion’s rebirth but his as a performer.


It was a distinctly non-EVOLVE beginning to a show, but with it being a weekend all about tinkering with the tried and tested format that made sense. Galloway seemed better on the mic than he had the previous evening, but he still wasn’t anything special. He deserves points for trying at least.


Which is something that can’t be said for Joanna Rose. She seemed to have very little understanding across the entire weekend of how to perform her role as interviewer. She phrased questions in peculiar ways and was very quick to panto up her reactions. If she’s going to work for EVOLVE in the future it might be a nice idea for her to have a look at some tapes of wrestling interviewers who were actually good. Considering what she’s shown us so far I think Gene Okerlund is probably a good person for her to model herself on.


Anyway, this interview wrapped up with Galloway saying he’d be a fighting champion and that he’d defend his championship in his match opposite Anthony Nese. This brought out Nese, Caleb Konley and Su Yung for the match then and there. Nese worked over Galloway’s injured hamstring for the first several minutes of the match before Galloway managed to start fighting back. Until Su Yung got involved to distract him, natch.


After several minutes Galloway made another gutsy comeback, hitting a drop kick and a pop-up power bomb. Things picked up with both guys going for covers. Nese was particularly impressive, getting a tasty super kick, landing on his feet after a German suplex and immediately hitting a double stomp, and rolling through a double arm DDT attempt. It was Galloway who won though, rolling out of the way of a 450 splash and hitting a double arm DDT to retain his championship. It was a tidy opener, a far better choice than the opener for EVOLVE 31.


Rich Swann showed up to mock Nese for losing the match. Then he revealed Su Yung had spent the night with him. She looked embarrassed and ran backstage with Nese and Konley in hot pursuit.


With them gone Swann congratulated Drew on a "great" match (it was very good, I wouldn’t say great) and told him he wanted the championship. Swann had been scheduled to challenge Hero, you see, and Galloway’s title victory meant that that match would now be non-title. So... awk. Drew said he'd put the title on the line then and there but the ref intervened and told Swann it's all about rankings now and he'd have to win to get to Galloway and a title bout. Swann said he’d do just that.


It wasn't much of a segment but I liked it. It got over Swann's passion for the title, the new rankings system, and Drew's willingness to be a fighting champ. And it did so quickly and efficiently.


A chop-fest followed that. Gulak went for some submissions while Raideen stuck with a combo of power and wear down (rest) holds. Raideen controlled the majority of the match and won after a lariat (which Gulak kicked out of at one) and a power bomb. It was a fun match which did a good job of meshing the different styles of the two men. Which, y’know, is part of the point of the tournament.


The Style Battle tourney continued with Timothy Thatcher facing Biff Busick. As the match got underway commentator Lenny Leonard declared that Florida fans are starved for great wrestling. Was this a knock on TNA? NXT? It seemed a peculiar thing to say given that EVOLVE flogs old shows based off the fact that many of their roster members have progressed to WWE developmental.


The match was slower than the previous two. Thatcher worked over Busick's wrist and elbow, which included the use of a kimura. Busick worked the neck and back although he was on offence less than Thatcher. It was a modern counter wrestling match. It was very good, a believable match with a logical style. Thatcher escaped a vicious rear naked chance and won with a Fujiwara armbar. The pair shook hands afterwards.


Match four saw Caleb Konley return to the ring, this time to take on Johnny Gargano. He had Nese with him and boos recorded on his entrance music, which is just about the most indy thing ever. The crowd didn't care about him. They did care about Gargano though. It probably helped that he seemed excited to be there and in a babyface mood as opposed to the creepy uncle mood that had been more common from him for the previous year-plus.


They had a great match. It started with Konley in control before Gargano got annoyed and floored him with a spear. After some brawling outside the ring Konley took control (thanks to a Nese distraction) and worked over Gargano's neck. ‘The Whole Shebang’ got a spear and peppered Konley with punches and chops before spiking him with a slingshot DDT. Konley got a tornado DDT for two. Gargano fired back with a picture perfect suicide dive.


Back in the ring Gargano countered a Boston crab into a small package for a two count. On their feet they traded a crescent kick, a bicycle kick and a super kick before Gargano floored Konley with a discus clothesline. 'The Obsession' got a Death Valley bomb off the top rope, with the crowd going nuts when Gargano kicked out. Konley went for the Oh! Face but found it countered into the Gargano Escape. Konley countered that into a pinning predicament.


Nese shouted that Gargano was a nobody, which got Gargano worked up. He spat at Nese, which, despite it being disgusting, the audience seemed to adore. Fired up, the former Open the Freedom Gate champ slung Konley on the top rope, presumably in preparation of a big finishing move. But Nese distracted him again, allowing Konley to shove him to the mat, hit the double jump moonsault and get the win. Which marked the second big singles win of the year for Konley on a WWN show, the first being his singles victory over AR Fox at EVOLVE 30.


After the match Konley took a mic and said the victory meant nothing. Gragano had been the golden boy and a two year champ, but Konley felt that Gargano was washed up. It was a good sentiment but didn’t have the best delivery. Still, it set up an issue between Gargano and The Premier Athlete Brand, which could lead to some exciting matches. So overall it as another hit.


Chris Hero v Rich Swann followed that. Gargano again tried to jump Swann as he entered the ring. Swann punched him and refs took him backstage. The match was another slow starter. Hero controlled the pace, outmanoeuvring Swann and muscling him around, with the commentary team playing up Hero's size and experience. Hero became progressively more aggressive as Swann survived bigger and tougher strikes.


This led to Hero throwing Swann out of the ring and lamping him with elbows and boots before rolling back into the ring to take a count out win. Swann guy back into the ring at nineteen and was immediately met with a drop kick. He managed to get back to his feet, hitting Hero with some strikes, a leaping neck breaker, a run-up back heel kick, a head scissors and a hurricanrana to the floor.


A frog splash got Swann a two count. He attempted a rolling frog splash but Hero booted him in the head, elbowed him and hit a second boot. Swann kicked out but couldn't return to his feet. Hero kicked him in the ribs and smirked, then hit a release suplex, the roaring elbow and a Death Blow. By this point the crowd were firmly behind Swann and booing ‘The Knockout Artist’.


Swann fired up as Hero taunted him, hitting three ace crushers. He attempted a 450 splash but was met with knees and a small package… which he reversed for the win. After the match Swann rolled to the outside and Hero lightly slapped referee Jamie Tucker’s head. He threatened an elbow before leaving through the front door as Joanna Rose shouted that everyone wanted answers. Her wooden performance couldn't detract from this being the match of the night: great story, reminded everyone that Swann’s a guy who won't give up, and showed us Hero's going to the dark side (in EVOLVE at any rate).


The Open the Freedom Gate championship match headlined the card: Ricochet defending against Matt Sydal. It was a predictably excellent match, very fast with lots of counters. It even had a sprinkling of comedy at the start. For me it didn't quite beat the previous match for best of the night honours because it didn't have as strong a story. It was the right match to close with though, because as good as Hero v Swann was it was not a main event story. Ricochet won with a Benadryller followed up with a 630 splash.


After the match Joanna asked Ricochet how he felt. He gave her a kiss on the check and said he's the best in DG USA, DG Japan, the best in EVOLVE, and the best in FIP and he doesn't he wrestle there. He said anyone in the back who disagreed should come out. He talked about how he wasn't impressed with Drew as Drew wandered out and stepped into the ring. The EVOLVE champ gave the Open the Freedom Gate champ some applause and called him cocky. Then he put over the following evening's match (Galloway v Ricochet) and said they'd steal the show. Would they manage that? Stay tuned…