From 2012 to 2013 Knux was a member of Aces and Eights. For those who don't remember (lucky them) that was a card-loving biker gang set up by Bully Ray to bring about the end of TNA.


For a while the group achieved moderate success as a lead heel faction. It will not be remembered as one of the greatest units ever but then very few things in TNA fall into greatest ever category. It did as well as could be expected before meeting its inevitable uninspired end. The breakup was slow and undramatic. Much like the average episode of Impact.


Since the group went their separate ways the only member that's remained a constant presence on Impact is Bully Ray. Which makes sense. Not only was he the group's biggest star but he was also the only member left at the end who had had a TNA contract before the group formed. It was easy enough to assume that everyone else had gone because they didn't have contracts while TNA were legally stuck with 'Calfzilla'. 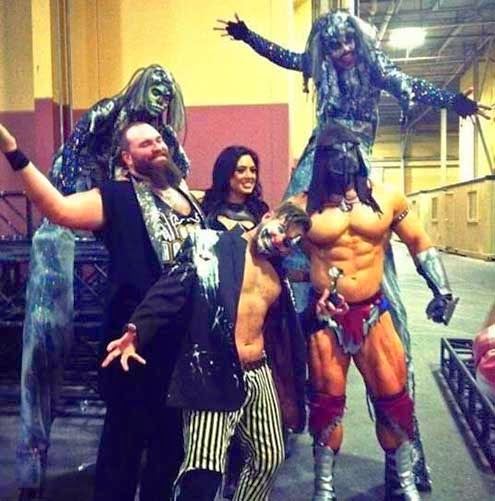 Instead of doing the smart thing and taking the opportunity to cut ties with the useless lump that is Knux TNA decided to keep him around for reintroduction later on. A recent series of vignettes have shown him shambling around small town America reconnecting with his roots. Those are not his real life roots though. No, those are kayfabe roots, which have revealed that Knux is actually descended from circus folk.


TNA will be reintroducing Knux to television as the head of his very own faction, The Menagerie. If we're being honest Knux’s leadership alone practically dooms it from the start. A second rate member of a second rate group whose most memorable contribution to WWE before he got cut was being the possessive boyfriend of Kelly Kelly. If this man is the leader, the best the faction has to offer and the man all other members take direction from, then it doesn’t say much about the group’s other members.


Beyond that there is the more obvious problem that this is TNA's latest WWE knockoff. The group seems poised to be presented as a gaggle of misfits from backwater America flocking around a charismatic leader who gives their lives meaning. It doesn’t seem possible to read The Menagerie as anything other than TNA's answer to The Wyatt Family.


The main difference is that we’ve had what comic book fans would dub an origin story with this group, whilst the means by which Bray Wyatt convinced Luke Harper and Erick Rowan has remained a mystery. Which is for the best. It adds to the group’s air of mystery. That’s something TNA failed to grasp when cobbling together their version.


They've shown a fair amount of restraint holding off on copying the Wyatt approach for as long as they have. The Bray Wyatt character debuted on NXT in July 2012 and introduced Harper in November. Perhaps Lagana and the crew thought The Wyatt Family should become a success before they lifted it for Impact.


The Menagerie seems like it doesn’t have a chance before it even shows up. Even if the other wrestlers involved have talent (and I'm in no way saying they don't) they're going to suffer comparisons to a very successful gimmick in a rival company. TNA's track record indicates the group will be mishandled or, perhaps worse, be openly modelled on said other group.


This is exactly what TNA needs to move away from if it is to increase its audience and remain in business. It needs its own voice and its own fresh ideas to be taken seriously and be seen as a company worth watching by anyone but TNA die-hards. No matter what small successes it may find, and I don't doubt it may find some, The Menagerie is not the solution to any major problems in TNA, nor can it contribute to solving any.
Posted by Dave at 08:39