I think it’s fair to say that nobody was blown away by Eve Torres’s run as Divas champion last year. In fact it’s entirely possible you’ve erased it from your memory. A meaningless belt being held by a limited worker isn’t something likely to stick in the memory.


Thankfully WWE have given up on trying to get Eve over as an in-ring competitor and found a new role for her, one in which she can actually benefit WWE programming and gain the desired reaction from the crowd. As John Laurinaitis’s Executive Assistant Eve is able to generate impressive amounts of heat and isn’t required to wrestle. That’s win-win. 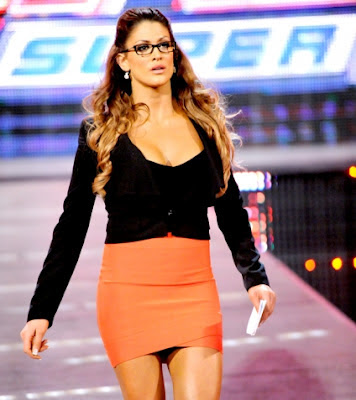 Eve is far more productive in this role than she ever was as a wrestler
She looks good doing it too, which is the point of her character. It was established at the very start of her heel turn that she is conceited and narcissistic. In fact she cut several promos exclusively on the subject of how easy it is to manipulate men with her looks, which made men boo her because they felt like idiots and women boo her because they she’s right. It’s a simple and effective way of getting a reaction from the crowd, one which plays to the woman’s strengths. 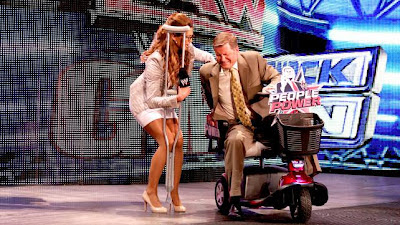 This article has given me an excuse to post this amusing picture of John Laurinaitis. You're welcome
Eve has gotten to this position completely by luck. She was paired up with Zack Ryder last year (when WWE were actually making use of the Long Island native’s popularity) because nobody could think of anything else for her to do. When Ryder was used as fodder for the Kane v John Cena feud the writing team was  presented with a new role for Eve. She turned heel on Ryder by trying to upgrade from him to Cena, who branded her a “hoeski” and said he wanted nothing to do with her. After being booked to lead ‘Long Island Iced Z’ for a few weeks she completed her heel turn at WrestleMania and was offered a job by General Manager Laurinaitis a few weeks kater.


If only WWE could pay this much attention to storylines involving stars who might actually make them some money!
At the time it seemed liked TV time was being frittered away on a character who would never amount to anything (and for once I’m not talking about Cena) but it turns out WWE’s plan was to prepare Eve for this new role. They did well recognising her potential for it and she deserves a lot of credit for pulling it off. She has become a surprise highlight of WWE television and I hope she continues to shine in the role.
Anything that keeps her from wrestling is fine by me.
Posted by Dave at 11:18