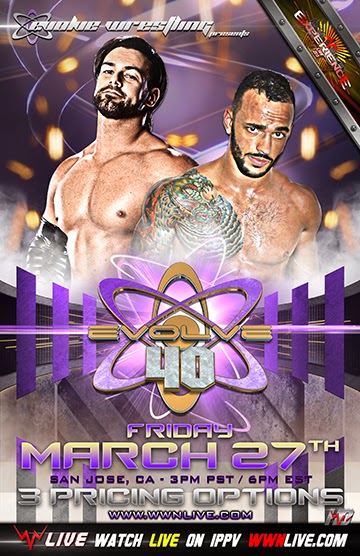 EVOLVE's second WrestleMania weekend offering of 2015 started off strong with the non-title match between EVOLVE champion Drew Galloway and the allegedly departing Uhaa Nation. This was a far better choice for the opening slot than the technical mat exchange between Gulak and Thatcher at EVOLVE 39. It's not that that match was bad, it just wasn't the exciting hook an opener tends to be.


Galloway and Nation spent the early minutes slugging away at one another (because big lads) before leaving the ring. There we got an early highlight as Galloway sidestepped an Uhaa moonsault from the apron and gave him a tilt-a-whirl back onto the ring's edge. Back in the ring Galloway went all Randy Orton and worked over Nation with stomps and a sleeper before 'The One Man Nation' managed to fire back with some clotheslines, rolling German suplexes and a splash from the top rope.


Like the previous evening's Galloway match this one ended with a surprise double arm DDT. Galloway went for it and got it seemingly at random and got the win with it. Clearly this was done to get the move over for Galloway's unification match against Johnny Gargano at Mercury Rising, a match he addressed after his victory. He waffled on a lot but basically his message was that he and Gargano would have a great match at Mercury Rising, which I'm sure they will. He's a passionate, shouty promo is Galloway. That helps when he's repeating the same message two nights in a row.


Match two saw Tommy End, with Chris Hero in his corner, take on Timothy Thatcher. Both men were popular with the crowd but they were easily more into Thatcher. The crowd went wild for him, presumably because he's announced as being from Sacramento, California. We're also assured he's English.


The match was all about Thatcher's mat wrestling being deployed against End's striking. Thatcher's had success early on but End's striking came into play in the match's second half. He smacked Thatcher with a kick to the temple, flooring him until the count of eight. From there a dazed Thatcher was dominated by End's strikes, although End found himself in the frustrating position of being unable to finish Thatcher off. He unleashed his impressive bicycle knee strike but it wasn't enough: Thatcher caught him in a Fujiwara armbar for the tap out victory.


After the match Hero entered the ring and bad mouthed Thatcher. Thatcher ignored him and walked backstage. Hero kicked the bottom rope in frustration then left to allow End to soak up some well-deserved cheers. This was another good showing from End.


Drew Gulak (with five unnamed seconds) versus TJ Perkins followed that. The mat-based 'Legal Eagle' against the nippy flyer could have been a disaster but it wasn't. They went out of their way to keep things fast and avoided sticking with submission holds for too long. TJP's submission abilities helped too, he clearly knows how to blend his flashier moves with hold into counter hold exchanges. Gulak won with the ankle lock after a series of reversals. Nothing occurred with the five nameless lads Gulak brought to ringside. They were just there to get over Gulak's new serious competitor gimmick.


Ethan Page v AR Fox was an exhilarating affair. It was the usual flash and sizzle from Fox (a stark contrast to his maddeningly bland character) and Page kept up fine, which was the most that could be asked of him in this situation. Fox survived a spinebuster onto the apron, a back breaker on the floor, a lifting reverse DDT, and a Tower of London onto the apron before coming back with a springboard Codebreaker, a Lo Mein Pain and a 450 splash to win.


After the match Page talked about how he'd let Johnny Gargano (the man who'd endorsed him) down by losing, which brought Gargano out to the ring. The Open the Freedom Gate champ gave Page a pep talk before bringing up the EVOLVE title v DG USA title match. Again he promised that he'd win that match and leave a double champion, though this time there was a greater emphasis on his history in the company and his contributions getting it to its current state. He offered more reasons as to why we should believe he needs to win the match with this promo than he had at EVOLVE 39.


The Chris Hero v Biff Busick grudge match followed that. Their issues first surfaced at EVOLVE 33, where Biff Busick had talked about his efforts in the 2014 style battle tournament and mentioned Chris Hero as someone the current generation of wrestlers wish to surpass. It was intended as a compliment, an acknowledgement of Hero's accomplishments within wrestling. But Hero took offense and an argument erupted. A few more followed with the final one coming the night before this at EVOLVE 39 where Busick vowed to choke Hero out with the stranglehold.


They had the stiff battle that was to be expected. Busick stayed true to his promise and spent most of the match attempting to apply his stranglehold finisher for long enough to choke Hero into unconsciousness. He applied the hold several times but never managed to submit or blackout Hero. That brought about a shift in approach and he started blasting the former King of Wrestling with suplexes. Hero weathered the storm and then smashed Busick with half a dozen elbows and a Tombstone piledriver for the victory. This match just outdid the main event to nab match of the night honours for me.


The card's lone tag match followed that. It saw the recently (and fairly half-heartedly) reunited Ronin team of Johnny Gargano and Rich Swann take on the new look Premier Athlete Brand of Brian Cage and Caleb Konley. I was again impressed by how good Cage is and felt that it was another strong showing from Konley, who has improved a great deal over the last year.


Gargano was good but not at his best, quite possibly because he was saving himself for his showdown with Scotland's own Drew Galloway the following evening. Considering how much that match has been built up it was an understandable move by the Open the Freedom Gate champ. That left Swann to deliver the thrills and spills. He accomplished this but injured himself in the process, necessitating the match being called to a finish early. Confusingly Konley tapped to the Gargano Escape before the referee announced that he'd ruled the match in the PAB's favour due to Swann's injury.


Had this run its intended course I imagine it would have ended up an inoffensive and fun, though ultimately forgettable, tag bout. But instead it will be most remembered for the peculiar ending. Though, on the bright side, that could be used as part of a Ronin v Premier Athletes story in the future.


The main event saw former WWE Superstar™ PJ Black take on Ricochet in a battle of the high-flyers. They set a breakdown speed and stuffed the match with spots and kept the psychology and lining sequences light (which was to be expected). The story of the early going was basically that Ricochet was a little better than Black, countering or immediately recovering from whatever Black threw at him. This included a great mid-air recovery off a monkey flip, a kip up immediately after a shoulder block, and a drop kick counter to a cross body.


This forced Black to up his game and he started getting an increasing amount of offence in on 'The Future of Flight'. It wasn't enough to get him a victory though. Following a surprisingly vicious exchange of strikes Ricochet got a two count off a top rope reverse hurricanrana then finally put Black down with a nasty power bomb and the 630 splash.


Unfortunate and unavoidable incident in the tag match aside this was another very good offering from the EVOLVE crew. Of the two cards presented this weekend I think this was the stronger. 39 took a little longer to get going with the three more technical matches kicking things off. 40 started with a rowdy bout that drew you in and kept improving right up until the tag match hit (and, again, at least part of the reason that match disappointed was beyond anyone's control). Ricochet versus Black was a superior main event. Black showed he could have been an asset to WWE and Ricochet again proved he deserves all the success he's had.