The general feeling is that a large TV presence legitimises a sports or entertainment product. This is as true in wrestling as it is anywhere else. Monday Night RAW is what helped the WWF to survive during the difficulties of the mid-90s. A national TV deal is what Paul Heyman was always chasing to take ECW to a fresh operational level. The lack of TV exposure is what caused Eric Bischoff and his backers to pull out if buying WCW.


There's a strong historical precedent and logical reasoning for television to be a high priority, probably the highest priority, for a wrestling company. Promotions like WWE and TNA do need television. Their sports entertainment approach necessitates a weekly TV show because they present wrestling more as a soap opera than as a sport. Sports entertainment is also built heavily around marketing the product successfully, with a TV deal being a large part of that.


While television will always be important to WWE, times have changed over the last decade and I don't think that having a TV presence is as important as it was for smaller wrestling companies. The internet has created other ways for them to make their product known. Sites such as YouTube and Netflix along with the general watch-on-demand culture that has arisen mean that a promotion has the option of putting out shows at their own pace. If they're capable of efficient creative and financial planning it's possible for a wrestling company to make a profit this way. They simply have to know what their audience wants to see and give it to them, dispersed across shows to keep them coming back.


Gabe Sapolsky's Dragon Gate USA and EVOLVE promotions are using this approach. They run batches of live internet pay-per-views and then upload them to be watched as VOD content. They’re also selling them as DVDs, providing another source of income. I'm not privy to the financial success of those companies but there must be some or the two promotions wouldn't still be around.


This is an environment that the original Ring of Honor approach seemed tailor made for. When ROH launched they would run shows intending to either break even or make a small loss, making their money back flogging DVDs. That approach served the league well for a number of years, both creatively and financially. In 2009 it came to an end when ROH announced they'd gained a TV deal with HDNet.


The HDNet deal saw mixed results for ROH. The weekly show took a long time to hit its stride and arguably never truly got as it could have been considering the roster of the time. That didn't matter too much. In one of the finest traditions of the wrestling business, it was a setup all along: the HDNet deal was something ROH did to gauge the level of interest in their product from a TV audience. Their intention was always to wrangle themselves a better deal with a bigger broadcaster at the earliest opportunity. HDNet gave them the stats and figures they needed to do that. 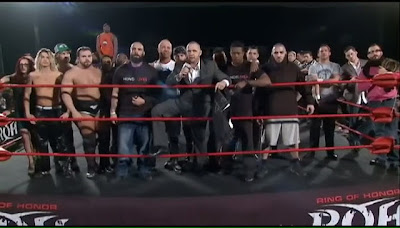 The ROH on SBG roster
That superior deal rocked up in 2011 when ROH was bought by the Sinclair Broadcasting Group, a TV network. The purchase came with the announcement of the ROH on SBG show, which begun airing in September that year.


The show was quicker to hit its stride than the HDNet incarnation but it's suffered from its own set of troubles. A poor creative vision throughout 2012 (thanks, Jim) meant the TV show was mostly uninspiring and lacked a meaningful direction. It's gotten better this year thankfully, but it could still be better.


Basically, I don't feel that Ring of Honor is cut out for weekly TV instalments. The promotion's style of presentation has been proven to work better with two or three larger shows clumped together each month. Switching back to their old operational model and focusing heavily on DVD sales and VOD content would allow storyline pacing to be improved and a greater level of experimentation to be employed when putting together cards.


Obviously this is not going to happen. ROH is paid to produce a TV show and it opens them up to a wider audience, who will in theory be keen to attend shows. Had online viewing been as prominent ten years ago as it is now ROH may never have moved to TV. But it wasn’t on they did, and they’re unlikely to leave TV behind now they’re there, because television will always be the holy grail for wrestling promotions.
Posted by Dave at 13:00